I love the Holidays! And I really, really love the “after the Holidays!” There’s something very precious and sweet to me about returning to routine… switching the year on the calendar and moving forward.

Or… maybe I’m just happy to have some “normal” back… and put away all the chaos! Oh but I do so love the chaos! For a bit at least!

If you happened to catch the Instagram video I posted of “worlds most precious toddler” having a Christmas Day melt down you understand what I mean. 🙂

We aren’t the biggest on making New Years Resolutions around here. I know many who love it – that’s awesome! Go for it!

We are more along the lines of making “themes” for the year. Choosing things to focus on for the coming year – both collectively as a family and independently as individuals.  This is something I really adore doing.

But sometimes to move forward – you have to be willing to leave behind some things. That can be a very hard concept for me. Our family event done on New Years Eve is one of my most favorite traditions.

Each person takes a small piece of paper and writes on it something they need to leave behind in “last year.” It can be anything that might get in the way of something they want in the New Year. A habit – an attitude – a grudge – a hurt… any “junk” that they don’t want to keep carrying.

Then we toss those pieces of paper in the fire and watch them burn – as we lay them down mentally and emotionally. 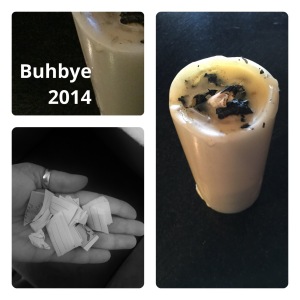 Now – if you think this sounds like a “Kumbayah” moment – I will tell you it was not. It is more of a

Complete with minor panic attacks. The inability to find enough ink pens. And we have no fireplace (uhhh Florida y’all!) so we use a candle – and I meant to get out one in a jar but someone grabbed a stand-alone so we tried using that one but… then someone shoved an entire piece of paper in the candle which of course caught fire and had to be doused in a nearby glass (thank goodness!). But we survived it all.

This year it was made even more special by having all of us jump up and sing along with Taylor Swift about “shaking it off” at the top of our voices and in several different keys accompanied by some of the most horrible dancing you’ve ever seen! Then followed by large amounts of laughter.

Not exactly the “communion” kind of event I always envision!

So yah. We were loud and crazy and there was definitely some yelling and some “Zoo” behavior that may or may not have been carried out by the toddler in the group – but we got it done.

And this crazy group that we call family, and do life with – welcomed in 2015 with a little less burden to carry – and a lot of encouragement and inspiration to keep moving forward.

We are saying “goodbye” to things that hold us back. Embracing a kinder approach to our own selves first so that we can extend grace and kindness to others. Sounds like a good way to start a New Year.

I’m soooo grateful that we have the ability to make these good for us choices more often than once a year! Any time, any day – we can make a decision to embrace the “good for us” and release the “bad for us.”

That sounds like a very precious gift to me! Happy 2015 you guys!

What about you? Do you have New Years traditions?

living an adventure dreams are made of!! traveling the world with mishaps built in! why?? well, u have to read more to find that out silly :)
View all posts by mE →
This entry was posted in faith, inspiration, perspective, woman and tagged 2014, 2015, Chaos, Family, New Year, Traditions. Bookmark the permalink.