Oh yes they call her the streak…

Garrett (Marcus’ 3 year old yellow Lab Seeing Eye dog) has earned the name “Ninja” around here – because he is very fast, quiet and sneaky! A well deserved title – and his antics bring us lots of laughter. Usually.

Garrett is not especially fond of purchased toys… his favorite things are empty water-bottles and ABC (as in already been chewed) chewing gum he finds stuck underneath tables and chairs when we are out and about, things like that. 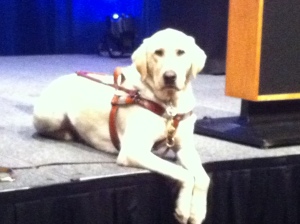 But hands down his very most favorite item is a common, everyday bath towel. He loves to play tug of war, chase, matador and peek-a-boo.  He will grab them off the racks, take them from the laundry basket and even steal them off the shelf in the linen closet if it’s left open.

Needless to say we go through towels at an alarming rate! But it’s just so darn cute! Again, usually.

This morning I finished working out and was headed to the shower when Garrett let me know he wanted outside. Marcus was upstairs in his office, so I opened the backdoor and out he went. I waited – he didn’t come back. Instead he staked out a nice sunny piece of landscape and proceeded to stretch out like a sunbathing teenager on spring break. 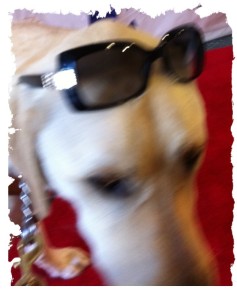 Rocking the Red Carpet in LA at the DROP movie premiere

I called him… but see, Garrett knows I’m “not his boss” so he usually ignores anything I ask him to do. He even refused to look at me as if to say “I’m ignoring you now – you can go away!” We have a picket style fence, but because we live on a lake and Garrett will jump in the water ANY chance he gets, we don’t leave the “Ninja” outside alone.

Sooooo because he isn’t coming in I have to go get him. Problem. I’m only wearing my sports bra and underwear. Remember – I was headed to the shower. Now, granted that is more clothing than many bikini’s but still I wasn’t going to walk outside like that – and of course my robe is in the washer – so I grabbed up a beach towel, wrapped it around myself and headed out.

Usually when Garrett sees me approach he knows I’m going to bring him in so he jumps up and runs inside. So I wasn’t surprised when he quickly stood and headed toward me. I was however caught totally off guard when he grabbed the end of my towel and with one swift yank had it in his mouth, off of me and was standing five feet away all doggie smiles and tail wags.

Horrified and stunned I let out what I can only (with a HUGE deal of embarrassment) call a “shriek.” You know, just in case the neighbors were missing the show I apparently thought they should all direct their attention to our backyard.

I proceed to run toward Garrett in an attempt to reclaim my property. “Oh boy! I love this new game!!” his every movement declared. I promise he’s practically laughing as I make that strange shrill gasping sound and pursue him – which of course means he runs further and further into the yard – me following right behind.

Suddenly it dawns on me that when this happened I was only about five steps away from the safety of my kitchen – so why am I now standing nearly naked deep in the backyard in clear view of anyone passing by??

As I hurried inside I realized something. My GOAL was to retain my modesty (lot of good that did!) But my ACTIONS took me in the opposite direction. If I had thought quicker on my feet I could have been back inside in less than 3 seconds. But no – I unintentionally chose a different route.

How many times have I been derailed because of a temporary situation?

Reacted rather than stayed the course?

While I am very tempted to take my kind husbands suggestion that I hang a hook and robe on the backdoor – I am hoping to have learned a lot more from this experience. 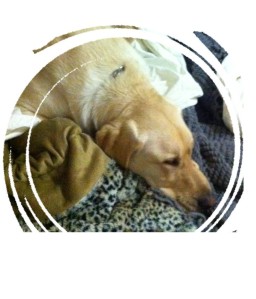 We all have something we want to do, somewhere we want to be, a dream to accomplish… but there are always going to be playful dogs disrobing us in public!

(Oh wait – maybe that’s just me…)  🙂  But there will always be unexpected events that will distract us… At this stage in life I’ve pretty much decided that is a guarantee – there never will be the “perfect setting” to accomplish your dreams.

So when you find yourself reacting in a way that is taking your focus in the wrong direction – be intentional in how you deal with it so you return to the course.

Oh – and maybe keeping an extra robe around will help too.

living an adventure dreams are made of!! traveling the world with mishaps built in! why?? well, u have to read more to find that out silly :)
View all posts by mE →
This entry was posted in Uncategorized. Bookmark the permalink.

5 Responses to Oh yes they call her the streak…